This undated photograph, probably from the 1920s, depicts part of 1506 Church Street in the Curtis Bay neighborhood of Baltimore City. At first I thought the building was a private residence. It turned out the building is part of a church. Described as a “Greek Catholic Church” in the MD Department of Assessments and Taxation record, it is identified as the Saints Peter and Paul Ukrainian Catholic Church according to this website. 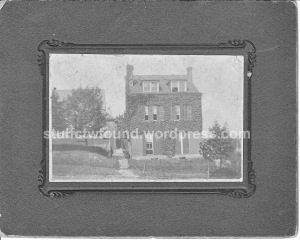 This photograph was in a box of stuff I obtained from Strawberry Fields, the same box where I found the Venice Etta Thayer Steward post card. The box contains material associated with the family of William T. Upton Sr. (1888-1973) and his wife Ruth Ann Griffith (1893-1984). There are dozens of photographs of Uptons and Griffiths, many inscribed on the back by the same hand as the above photograph. Watch for more on these families, unless a family member who wants this material comes forward.