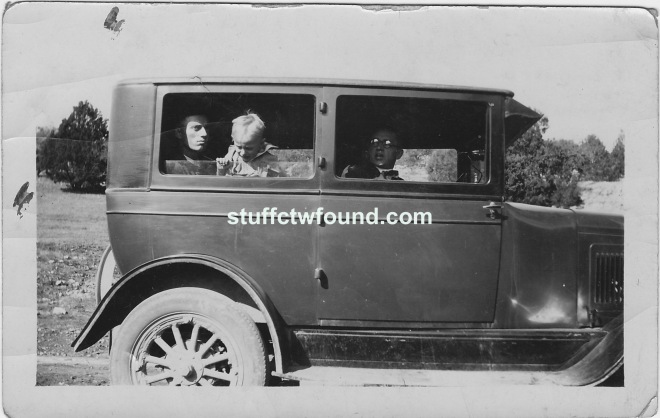 It took a while to figure things out using the information in the caption written on the back of the photo. To start with, this photograph was in a box that contained a lot of photographs from Michigan (See my previous post about the Morgan Sisters) and that gave me a hint about where to start looking. It turned out Carl and William died in Monroe County, MI where Frankie was born. I arrived at the name Coutcher by trial and error, then connected the Coutchers with the Kelleys. The final bits of evidence were Carl’s signatures on his WWI and WWII draft registration cards (see below) which matched the handwriting of the caption, also proving that the caption was written by Carl. We can suppose the photograph was taken by Ethel Chloe Kelley (1893-1986) who was Carl’s sister, William’s wife, and Frankie’s mother.

Carl and Ethel were two of the four children of Alonzo Caleb Kelley (1846-1914) and Alice Suray Miller (1870-1959). Carl, who never married, was a metal worker by trade. He is buried near where he was born in Hancock County, OH, in McComb Union Cemetery along with his parents and 100 other Kelleys.

Frankie moved to Tampa, FL in 1948 had a career in medicine. He married Ruth Ellen Byus (1927) and they had several children. You can read his obituary here.

All of the photographs I examine have hidden stories, but this one sparks my imagination more than many. In all of the 1920’s William, Ethel, Frankie, and Carl were living in Toledo, OH, much of the time in the Kelley house on Yondota Street where there is now a vacant lot. A trip to Santa Rita, NM must have been part of a grand tour. Santa Rita would not have been the destination of such a trip, only a stop along the way. Obviously this was not the only photograph Ethel took, but perhaps this is the only one Carl captioned. Assuming Frankie is sitting on his father’s lap, what is Carl telling them? William does not look pleased. What is causing that look of alarm on Frankie’s face as he looks down at the ground?

Below is the caption on the reverse of the photograph. 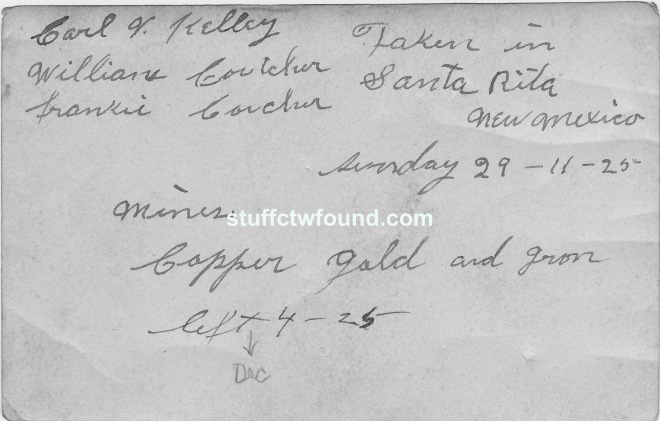 Three Men in a Car

2 thoughts on “Three Men in a Car”