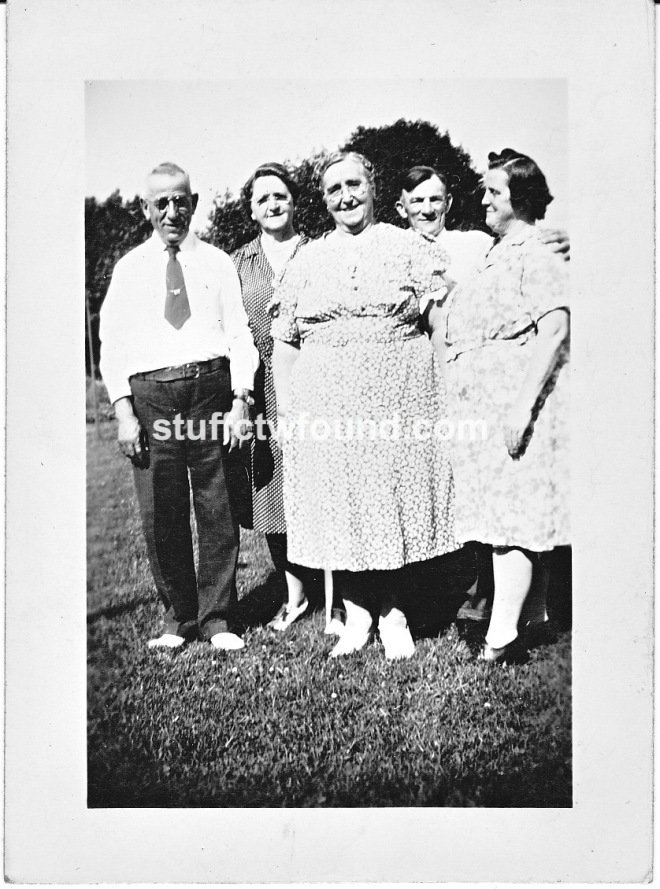 The inscription on the back of the above photograph reads, “Charles & Sarha Ohmor; Catherine & Harry Storll; Marge Sipe.” This photograph was purchased in September 2016 along with the photograph that is the subject of my previous post about Aunt Edna Stroll. It’s pretty obvious to me that the ladies in the photograph are related. It also seems obvious that Marge Sipe is the person in the middle. What I am not sure of is which couple is which?

Marge’s sister, Sarah Elizabeth Beck (1886-1976) married Charles Omar (1880-1950) in 1906. In 1916 Sarah and Charles adopted a girl from The Children’s Home of York whose name at the time of her death was Alverta L. Heilman Omar Martin (1911-1944). I am not sure how that name came about. Alverta died while a patient in the Mont Alto Sanitorium. Charles was born in Algeria and legally changed his name from Omar Bene Haddadene in 1913, explaining to Judge Wanner that his original name was “too cumbersome, vague and hard to understand and thus hinders him as well as inconveniences him in the transaction of his business.” That business was to “go about the county selling dry goods and notions.”

Both Charles and Harry had some difficulties with their wives. A 13 July 1911 article in the Reading Times with a York byline reported that Charles was “mourning at the same time the loss of his wife and his bank account . . . Omar had been out a few hours and upon his return found a note from his wife on the table [which] informed him that Mrs. Omar felt she was fitted for something better than the life she was leading.” The joint bank account had contained $160. Harry placed a notice in the 30 April 1918 edition of The York Daily notifying all persons he would not be responsible for debts incurred in his name by his wife, Catherine Storll, who had “left her bed and board without just cause.”

As for which couple is which, I assess that the couple on the left are the Storlls and the couple on the right are the Omars based on very slim evidence: In their WWI draft registration documents, Charles had black hair and Harry had “light colored” hair. When they registered for the WWII draft both were described as having gray hair.