Albert and Bessie grew up in Cumberland, MD and married there in circa 1900. They both performed in vocal ensembles of various configurations at the First Presbyterian Church on Washington Street and at the Y.M.C.A. Albert worked as a clerk, timekeeper, and statistician for the B&O Railroad and retired on 3 July 1940 after 43 years of service. Bessie worked as a dressmaker and stenographer. Albert was a member of Ohr Lodge No. 131, A. L. & A. M for 35 years. They had one daughter, Elizabeth Carlin Reuschlein (1903-1977). She married Clinton Leroy Ewing, Sr. (1898-1989) and they had one son, Clinton Leroy Ewing, Jr. (1925-1983).

Bessie and Albert moved from Cumberland to Baltimore around 1920. They were buried in Woodlawn Cemetery in plot which is also the final resting place of Carlin and her husband (findagrave.com memorials 157268103-6).

Bessie and Albert were great hat people. Below they’re posing with Carlin. 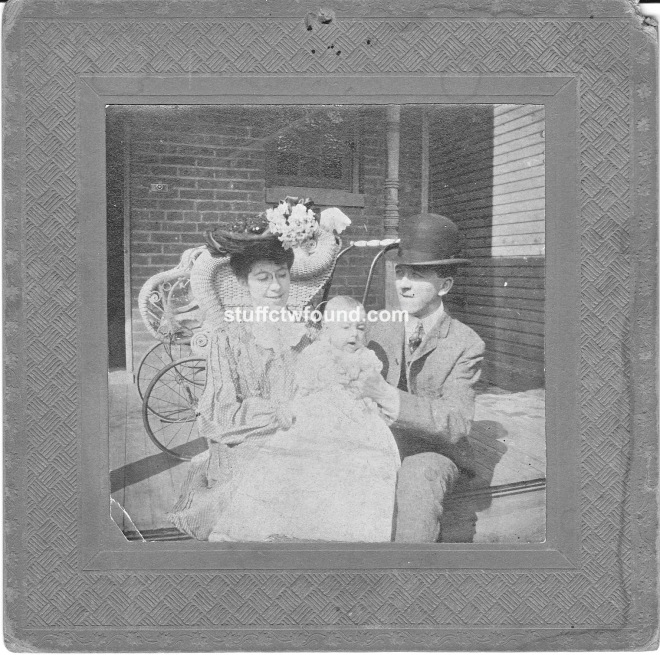 Here is Carlin and an unidentified man:

I bought these photographs at an antique store on The Avenue in the Baltimore neighborhood of Hampden.

Reuschlein and Wolfe and Great Hats