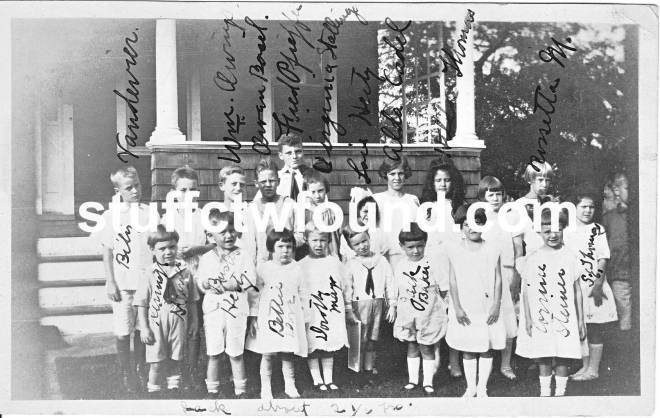 The above photograph depicts a group of children living in Germantown, a neighborhood of Annapolis, the capital city of Maryland. I am not yet sure of the occasion for this photograph, or its exact date and location, but perhaps these details will become known as I write about the more of the children. Please feel free to chime in with theories.

The detail photographs below depict children of Harold Burton Herty (1891-1978) and Margaret H. McClure (1896-1971). Harold was a career U.S. Navy officer who retired as a Captain (O-6) in 1947. He began his seagoing life circa 1913 as a wireless operator aboard the SS Marowijne, a vessel operated by the Tropical Fruit S. S. (Steamship) Company sailing between New Orleans and Central America. He apparently joined the Naval Reserve circa 1917.  By 1918 he was an ensign stationed at Naval Station New Orleans where the first two of their three children were born. He was transferred to temporary duty at the Naval Experimental Station at the U.S. Naval Academy in Annapolis in 1922 and their third child, Charles Samuel Herty (1922-2004) was born there.

To the right is Harold Burton “Buster” Herty, Jr. (1919-1943) who was born in Annapolis, MD. While living in Vallejo, CA in 1941 he was the the first person to have his name inscribed on a plaque commemorating the selection of the outstanding cadet at the Long Beach (CA) Naval Reserve Aviation Base. Lieutenant (JG) Herty was killed in an aircraft accident in Pensacola, FL in December 1943. He is buried in Arlington National Cemetery (49203142).

Both siblings were members of the June 1937 Senior Class of Herbert Hoover High School in San Diego.